Virginia's Historic Triangle, defined as the area encompassing the City of Williamsburg, James City County, and portions of York County (Bruton District, the Naval Weapons Station, and the Yorktown village), is located in the Virginia Coastal Plain on the peninsula formed by the James and York Rivers and the Chesapeake Bay. It is part of the Hampton Roads region and the Virginia Beach-Norfolk-Newport News VA NC Metropolitan Statistical Area (MSA). This area has been dubbed the Historic Triangle because of its unique role in the founding of our nation. The western point of the triangle, Jamestown, located in James City County, was founded by the first settlers in 1607 and is the site of the first permanent English settlement and the first colonial government in America. Williamsburg, the northern point, served as Virginia's colonial capital during most of America's struggle for independence. The eastern point, Yorktown, where independence was won, is located in York County and is the site of the final major battle of the American Revolutionary War. 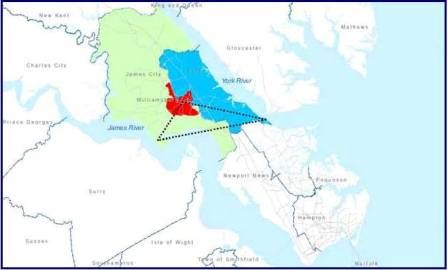